There’s a common idea for stockpiling ammunition. Some do it to avoid an increase in prices, others do it in anticipation of societal collapse. But how long is ammo good for? Does it explore? Here’s what we know.

If you ask an ammo manufacturer, they’ll likely tell you that ammo is good for 10 years. That’s a significant amount of time. But it might be even longer. That 10 year expiration date is similar to having expiration dates on bottles of water. They have to put a safe answer for legality’s sake.

How long does it really last, then? According to an article on NRA Family, Jeff Johnston once fired his father’s Lee Enfield WWI-era bolt-action rifle with .303 ammo purchased back in 1925. That’s nearly 100 years old. And according to him, it shot just fine.

NRA Museums Senior Curator Doug Wicklund further commiserates this, claiming to have shot  “factory loads from the 1870s, and they went bang and hit the target accurately.”

So How Long Does Ammo Really Last?

The safe answer is 10 years. The realistic answer is that it depends on the quality the ammo is produced, what it’s made of, and how well it’s kept.

Modern ammunition is made with coated metal. This keeps it from oxidizing overtime, allowing it to have a nearly endless shelf life. Old ammo that’s not jacketed, sometimes called Cowboy bullets, are pure lead. This metal will definitely oxidize over time and is more likely to falter sooner.

The most important thing remains to be storage, however. Ammo is a combination of metal and explosive material. As such, it should be stored in a cool, dry place. Moisture can warp or corrode the metal, and reduce the effectiveness of the gunpowder inside. Powerful heat or cold can also warp the metal, potentially altering the effectiveness or safety of the bullets. So keep them out of attics and car trunks.

We recommend storing ammo in a proper ammo container. They are specifically designed to be water and dust resistant. Some even have stacking grooves, allowing you to store several of them over a small area. If moisture continues to be a concern (maybe you live in marshy places like Florida), then we also recommend getting a dehumidifier. 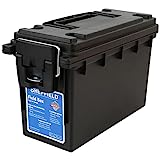 We also suggest “rotating stock,” where the oldest stock is moved to the front to ensure it’s used next. This keeps older stock from allowing it to grow even older.

A bad bullet is a bad time, be responsible with your firearms. Don’t forget to clean your guns regularly, too.

How Highland Park Police Saw the Signs, but Disregarded Them Anyway

How to Decide If You Should Bulletproof a Car: Costs and Levels